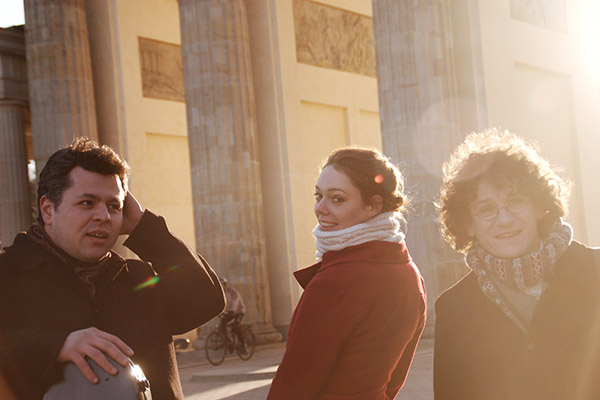 Prize-winners in the prestigious 1999 Bonn Chamber Music Competition, the Jacques Thibaud String Trio was founded at the Berlin School of Art in 1994. Since then, the ensemble has performed throughout Europe, Japan and North America, receiving tremendous acclaim from audiences and critics alike.

Calling their playing “spontaneous and commanding,” the New York Times said, “this could be the first string trio in some time to have a major career.”

In December 2005, the trio gave five performances in San Francisco and other west coast cities of Mozart's rare, unfinished Sinfonia Concertante for Violin, Viola, Cello and Orchestra with the San Francisco Chamber Orchestra.

With their charm, youthful exuberance and astounding virtuosity, the Trio has delighted audiences of all ages in large and small venues. In the U.S., they have appeared at Lincoln Center’s Alice Tully Hall, New York City’s Frick Collection (twice), Washington DC’s National Gallery, hundreds of other venues including Stanford University, the Caramoor Festival, the Cleveland Museum of Art, and cities including Boston, Los Angeles, Chicago, Pittsburgh, San Francisco, San Diego, Milwaukee, Houston, Dallas, San Antonio, Memphis, Indianapolis, Phoenix, Tucson, Salt Lake City and Honolulu. As Ensemble-in-Residence at the 2001 Florida International Festival, they drew an audience of over two thousand to their final concert. They have also given successful residencies in a settings ranging from conservatories to music camps to an Indian reservation in Arizona.

Internationally, the Trio has appeared at London’s Wigmore Hall, throughout Germany, in major Japanese cities on several tours, and at some of Europe’s most prestigious festivals including Belgium’s Musica Mundi, Gidon Kremer’s Echternach Festival in Luxembourg, and Denmark’s Roskilde Schubert Festival.

In 2009 they played a gala –concert for the German embassy in Paris at Palais Beauharnais in Paris.

“These musicians are clearly on a mission to bring attention to the neglected string trio repertory. But they are also having fun. It's the best combination. Success is sure to come to them.”